Viafin-Atlas have started a survey which is replicated throughout several websites.  You can see the global results from each question as you vote.  The results so far are surprising.  You may want to see the Circumcision Disaster Page first.   CLICK HERE

At some stage in 2023 we will forward the end results to several medical authorities in Europe, the USA & Canada.

"Your Opinion Is Valued"

SenSlip* Foreskin  ... is a 'Registered Trademark'

The Cut Is Mutilation

A new study in the British Journal of Urology (International) shows that men with normal, intact penises enjoy more sexual sensitivity - as much as four times more than those who have had an average circumcision. Circumcising slices off more of a male's sensitivity than is normally present in all ten fingertips.  In every site tested, intact men have as much or more fine touch sensitivity on their penis and foreskin than a man who had an average circumcision.  Circumcision removes the most sensitive portions of the penis.​

This new study demonstrates what we have suspected for decades, that circumcisions result - if not it's intent  - is reduced sexual pleasure for men.  As such, it is a violation of male's right to Bodily Integrity.  In part, female circumcision (FGM) does the same thing.  Even the mildest forms remove the most sensitive portions of the female's genitalia.  Females in the USA and elsewhere are protected by law from all forms of genital cutting.

Because circumcision and the associated risks of the procedure have such a drastic effect on sexuality later in life, no infant or child should ever experience a non-therapeutic circumcision.  Parents should not be allowed to control their son's level of sensitivity because of a personal bias or prejudice, just as no parent should be allowed to request for their son or daughter for any other sensitivity reducing surgery.  For example:  eye surgery that would limit the vision to black and white.  Adult men who want to be circumcised for, should be advised by proper informed consent that penile sensitivity will be reduced on average by a factor of four.  Men should also be advised that circumcision will not prevent the transmission of sexually transmitted diseases, including HIV/AIDS

To see what the    'British Journal of Urology (International)'   have to say about Infant Circumcision  .....  scroll down the page 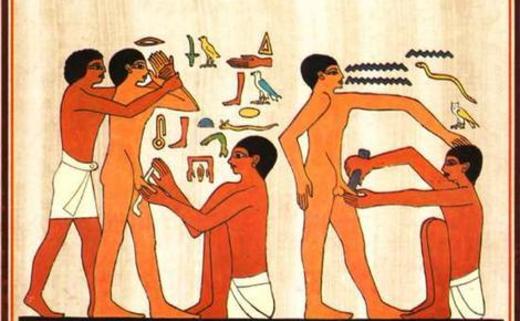 The History of Circumcision

Male and female genital cutting has been going on for thousands of years.  The people that carry it out, enjoy it.  Genital cutting has been done for a huge variety of reasons.  In most cases it has been done for a reason which the circumcisers feel would be acceptable for those around.  The two guys in the ancient Egyptian picture below, look old enough to understand what they are going through.  Babies and infants do not.  The many excuses and reasons for genital cutters to circumcise have varied vastly over the years:  In the old days, circumcision apparently miraculously cured a wide range of illnesses, including: madness, blindness, laziness, masturbation, hyper activity and more.

These days the experts who want to keep on circumcising infants without their consent are saying that it will prevent sexual diseases, HIV/AIDS and make you live longer and make you more resilient to catching nasty diseases.  Circumcising is also a very lucrative multi million Dollar/Euro business, not just for the cutters but also for the cosmetic companies who value an excised infant foreskin at over $ 2000.

In Europe, 97% of adult men have a fully functioning foreskin.  Apart from the odd one or two, most adult men have got absolutely no intention of getting circumcised.  This comes back to the circumcisers promoting the circumcision of babies and infants, who are not able to speak out.

The Extent of Circumcision

Excision (injury) to all or part, or all of, the skin and specialised mucosal tissue of the penis, including (the majority of cases) the removal of the foreskin, frenulum and penis shaft tissue.  Any procedure which surgically interferes with the penile skin structure and functioning of the penis.  The most 'acceptable' and 'common' type of male circumcision in the modern world, is the surgical amputation of the foreskin, frenulum and between 20% and  80% of the penile shaft skin.

These penis parts are the most sexually responsive tissue parts of the penis, and their removal accounts for the majority of circumcisions.

Male infant circumcision is a permanent procedure which causes harm every time it is performed.  It sexually reduces the individual's right to a normal functioning penis for ever.  The short and long term consequences of non medical infant circumcision are now becoming well documented.  They vary relative to the severity of the procedure and generally get worse with age.  The short term consequences include:  severe shock, haemorrhage, infection, skin bridges, excess penile shaft skin loss, glans deformation and loss of penis.  As stated previously, it also causes death of the infant.

Non medical infant circumcision can leave a lifetime scar on the mind and body of the man who underwent the procedure as an infant.  In the longer term the consequences of circumcision are worse.  Circumcised men can, and often do suffer from feelings of anger, resentment, depression, mutilation, post traumatic stress disorder, and sometimes suicide.

Welcome to the Circumcision Page.  This page has been designed to explain the physical differences between the Intact (uncircumcised) penis and the circumcised penis.   Also, an explanation and description of the immediate and long term physical and psychological effects, that circumcision can cause.

A Report by:    'The British Journal of Urology (International)   -  Please scroll down the page

Circumcision, for non medical reasons, carried out on infants is regarded by many as Genital Mutilation.  Male infant circumcision comprises just about any procedure which removes healthy tissue from the infant penis.  It is not limited to just the foreskin.  The most common circumcision procedures are carried out on baby boys or infants who are too young to have any say in the procedure.  Every day, throughout the modern Western world, little boys, with real lives, real names undergo circumcision without any respect for their own right to bodily integrity.  Many of them are left with sexually dysfunctional genitalia, amputations and sometimes death.  The facts are well documented, but not well publicised or explained.  Circumcision of infants is big business for doctors, hospitals, circumcisers and equipment manufacturers.  The excised foreskin is a valuable trading commodity for the cosmetic industry.

There are many different types of male circumcision or male genital mutilation.  The extent of the circumcision procedure has never been medically or legally defined. (2021).  Circumcision can vary from having part of the foreskin removed to having the foreskin and frenulum removed to having the foreskin, frenulum and all of the penile skin structure removed.  In some cases the glans and/or the entire penis is removed by mistake.   In North America and Europe, circumcision causes death to about 200 infants each year.  That is the equivalent of an air crash full of baby boys each year. The  facts are undeniable. They generally seem to be ignored.  Many infants, are left with catastrophic and life changing injuries.   The effects of some circumcision disasters can be seen at our 'Circumcision Disaster' page:  CLICK HERE

In some modern civilised western countries including the United Kingdom, infant circumcision is totally un-regulated.  With the consent of the parents, a baby boy can have his genitals cut by anyone.  No training or certification is required.  Even a tourist can circumcise a baby boy in Britain with no legal outcome.